When my aunt texted me asking if I wanted to go to DC for the Women’s March on Saturday and I wasn’t working, it was a no-brainer to say yes. I didn’t think I’d be able to go otherwise because New Haven wasn’t having a rally and I didn’t have the money for gas to get to Hartford. But actually going to the capitol and being around the heart of the actual problem and reason we all got together was an even better option!

We left around 12:30 and drove all night. For once the George Washington Bridge didn’t look like a parking lot and we made it by about 6 am. I’d been running on about an hour or so of sleep after waking up at 3 to be at work at 5 in the morning and my aunts had slept about as much as well. But we were so excited we were able to talk the entire ride down and couldn’t even catch a nap before heading out towards the Smithsonian at 9.

Somehow, we lucked out and were able to get a spot in a parking garage about a mile from the main hub so we barely had to walk at all to get there. And, we didn’t get lost because we ran into some guys from Oakland traveling around the country selling T-shirts for all sorts of different events from the playoffs to the inauguration and protests.

When we first arrived at one of meeting points, it didn’t look like there were a lot of people there. There was no lines for the port-o-potties yet (fun fact: the company was Don Jon, but the name was covered up. I guess because people would probably be too excited to shit on Don). Metro police had blocked off a lot of the streets but there weren’t crowds of people inside of the barricades. But I took it as it was still early and not everyone was there yet.

Once we got in front of the Smithsonian Native American exhibit, where the stage was set, I realized where everyone actually was. It was over an hour before the rally was set to start and already you couldn’t get anywhere near the stage without fearing you would get involved in a mosh pit. We found a spot closer to the front than tons of other people, but our view was still obstructed by some news and camera vans. We had to watch everything on the screen.

When Charlie Brotman came out to announce the start of the rally, it made everything feel so much more amazing. Right off the bat, we start out by saying you cannot just dump someone who has been loyally announcing every inauguration since Eisenhower through email! What are you, some high school bro who can’t look a girl in the eye and break up with her like a man? It was an honor to have him on our side.

America Ferrera opened the speeches and hit my thoughts right on the head. She talked about what our country has always been: a place that is home to everyone, regardless of their backgrounds. The president and the people running my country are not America. We know that our Founding Fathers are rolling in their graves at the way our constitution is being interpreted. I find it not only appalling but disgusting that there are people in the country that I call home who actually think that the things he says and does, the way he thinks, the ideas and hate he spouts openly, are good for this country. 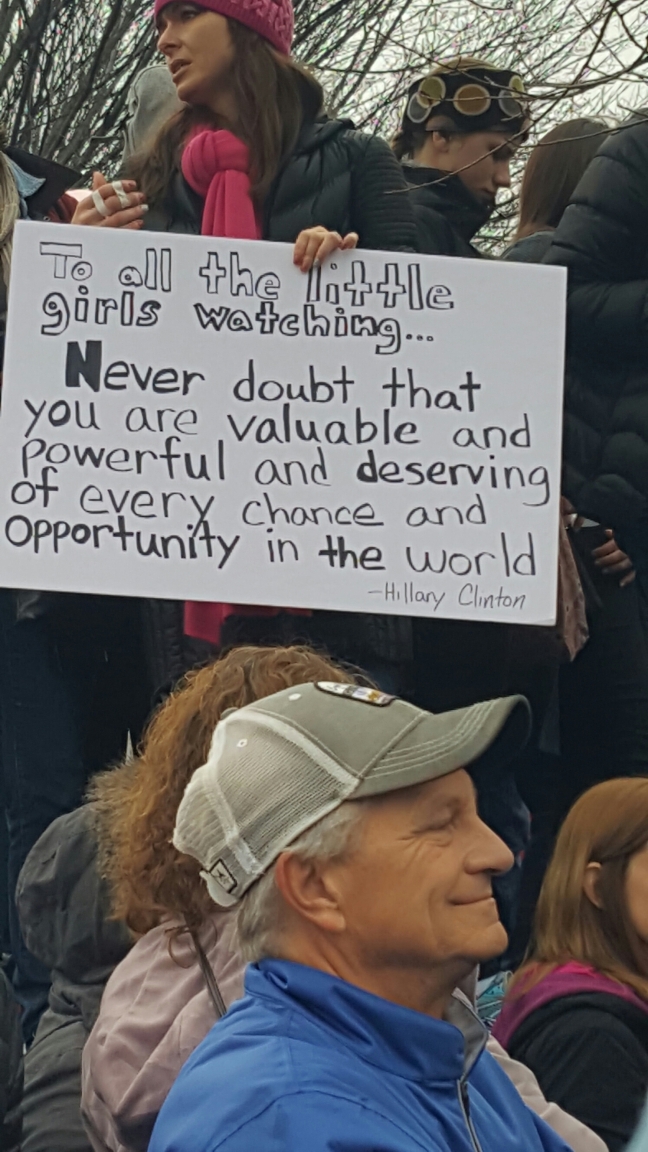 Do you want to really know about my country? Want to really know about my America? My America knows its constitution and does not forget that freedom of speech, religion, assembly, and press are all for the people and shall not, unless under certain circumstances, be infringed upon. We do not let anyone, not even the president, tell us that one religion should register themselves; never even DREAM of saying that peaceful protests should be made illegal; and I still can’t understand how telling scientists they cannot release new information isn’t illegal. And this is the asshole who says he’s for the people and wants to bring this country back to the people? I guess I thought that meant more than the four men living in a cave in Idaho.

My country was built on refugees. My ancestors left England to avoid religious persecution from the King. They left everything behind with mere hopes and dreams of an unknown New World because they saw their freedom of religion as the most important.

Our brothers and sisters gave their lives so we could have our own freedom and not be forced into paying outrageous taxes without even getting a say. They knew that there would never be a world good enough for their children if they had to answer to anyone but ourselves. We were the first people to ever defeat the superpower that was Great Britain and we did it with nothing but our own gumption. I come from people who pass down their stubbornness and determination more often than hair and eye color is passed down.

My America is made up of a nation of spit and fire. We were the first to say that countries are made for the people and that all men are created equal. That does not mean that Latinos are second class citizens; that blacks can be treated as property; that Muslims should be left to die. My America accepts everyone that needs her the most; she accepts the tired, poor, the huddled masses, because they are the ones who deserve the dream of starting from nothing to becoming someone. My America allows anyone to be whatever they want. 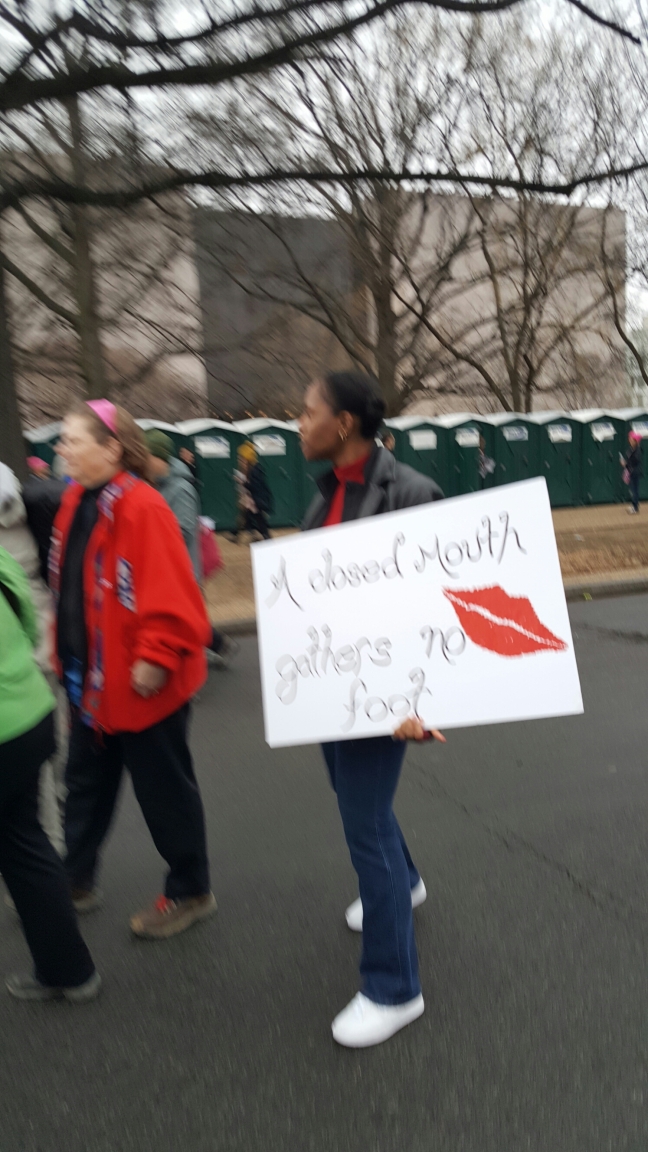 I was always proud of my country. I stood for the Pledge in grade school, I celebrated Flag Day in June and lit fireworks in July. I thank every veteran who I come in contact with, even going so far as to buy them food if I have the ability to. The person for whatever reason running my country cares nothing for us or them. He cares about himself and his money and many who voted for him are starting to realize that. I hope the rest do soon too so we can get rid of him. Put him out on the streets and see how he likes it!

I never wanted to have to write something like this. I wanted to be able to say that the campaigns of 2016 were insane and a fluke and all worked out in the end. I never wanted to have to explain or even think about a day when I could lose my right to choose, that I’d have to fear for my health. I’ve already had to choose between food and rent before; I don’t want it to come down to my health or my roof. No one should ever have to choose that, but the recent changes to ACA are forcing millions of people to do just that. It’s disgusting and I have never been more ashamed of my country.

Seeing all these women out there in front of the house that kept Obama and Kennedy and Washington safe, and therefore my home safe, makes me a little less ashamed. There are still many of us out there who see what is right. It may not be the easiest thing to do, but we have to keep going. Banning Muslims, building a wall, freezing tons of government jobs, forcing women to be owned by their husbands again, are all easy routes. But they will never be the right ones. This is not over and it is nowhere near the end. We will get through this and having millions of women across the globe who have our backs mean that we will go far. I promise you, this will be a hard fight, but it has to be worth it.