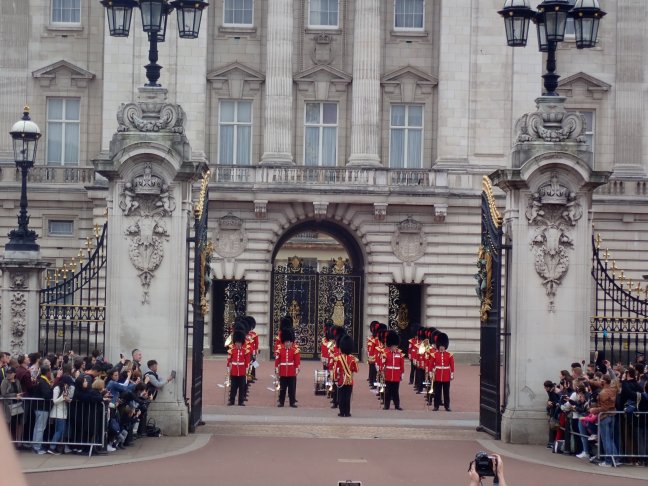 I set multiple alarms to wake up if I have to go somewhere in the mornings. We’re talking five or six alarms, all at different times to force myself out of bed. In high school, my alarm clock was across the room from me so I had to get out of bed to turn it off (and even that didn’t always work). So, of course, when there’s something going on in the morning when I travel, no matter how much I want to do it, I dread it.

So, of course, on our trip to London, I decided I wanted to see the changing of the guard. It’s at 11 in the morning, it’s not that early. I can do that, I’ll be fine.

Let me tell you a little something about London. It’s five hours ahead of Rhode Island and when you’re only there for a few days you don’t really adjust to the jetlag all that well, so suddenly the event is at 6 in the morning, which is already crazy, but it’s also a super touristy event, which of course means you need to get there very early to get a good view. Basically my alarm was set for 9 am, which is 4 am to me…and I couldn’t resist the snooze button.

The snooze button has to have been invented by the devil himself. I really don’t know why it was created besides to let people like myself just fool themselves into thinking it’s okay to sleep longer when it really is not. Like for real, is there anyone that actually hits the snooze button and then feels good about that when the alarm blares a second time?

I avoid hitting snooze when we stay in hostels because it’s just rude to have to make others hear your alarm. But I am nothing if not resourceful when it comes to my laziness and so I set multiple alarms with different sounds so at least it’s different. Because that’s less rude, right?

Then Richie, who is as bad as I am at waking up, if not worse, was doing the same thing as I was. So let’s just say by the time we left the hostel, we should have been there already. We weren’t going to miss the ceremony, but I knew we wouldn’t be seeing much.

You ever see those Instagram photos of tourist sites? Buckingham Palace, the Spanish Steps, Eiffel Tower, Taj Mahal, etc etc? I even have one at the Acropolis. Do you know how they are the only people in the pictures? They’re either insanely lucky, arrive at an ungodly hour, or use PhotoShop.

If you want to get your photo otherwise, it’ll end up looking a lot like mine from Buckingham Palace.

An absolutely beautiful view of the back of tons of people’s heads. I think you can see the guards if you squint and tilt your head sideways and imagine them waaaaaaaaay in the back.

The one I have at the Acropolis was where I just happened to get lucky. What you do see is me looking all excited to have finally gotten a decent (if I do say so myself) picture. What you don’t see is that I had been walking around for a good fifteen minutes trying to get a picture and that there are hundreds of people on the other side of that wall behind me. I just angled my phone so you can’t see anyone else’s heads.

Sometimes the perfect picture is an illusion. And I get bored with perfect anyways. Which is why you get all these pictures of the lovely tourists’ heads!

But here’s the thing: just because I didn’t take amazing Instagram worthy pictures doesn’t mean I didn’t enjoy myself. I saw this huge display that they make out of a shift change in person. I never had drums playing and the military hanging out when my security guard shifts ended…I just had my boss occasionally bring me a sandwich from McDonald’s. But then, I also didn’t guard the Queen, now did I?

It’s basically a mini parade every couple of days and I think that’s awesome. It’s like Times Square…go there once, see all the fun stuff, take your selfies with the entertainers…and then avoid the entire area like the plague because the hidden gems are calling.